GUITAR. I could practically sum up the entire day with that one sensual word, but i’ve decided to give y’all a slightly more detailed glimpse into the interesting and highly underrated Blue Mountains Folk Festival.

BMFF has been run annually for 20 years, and has continually exposed an abundance of Folk, Blues and Roots musicians. Through doing so they have welcomed seriously eclectic crowds, and 2015 was no different!

From your dread rockin’, barefoot hippies to your stylin’ men lookin oh so Chris Dreja circa 1963… everyone that attends the festival has an interesting story to tell, most especially the performers!

At the ungodly hour of 10 am Nick Charles Guitar Circle were first up and lord knows I was hoping to witness something invigorating! Consisting of Nick Charles, James Church, Daniel Champagne, and Glenn Skarrat each delivered their own unique sound, yet as they solo’d away on perfectly sculpted acoustics, and played ‘celtic’ jigs on an exquisite dobro, I couldn’t help but get my mind off Daniel Champagne’s mind altering cover of the 60s clas Spoonful.

Champagne is virtually unknown to most, but at 24 he is one of the greatest guitarists i’ve encountered. His technique is convoluted. A mixture of finger picking, slapping, yes… slapping! and placing it like a violin, I was in awe. He played his instrument as though it was the most intricate thing on earth, and it was POWERFUL to watch.

Champagne, and the rest told a few stories in between songs, and had set a high standard for the day! I was well awake after that performance, and for a while I pottered around from tent to tent, broke my polaroid, and chatted to the interesting locals/quirky store employees hoping to find some music that would get me captivated.

It wasn’t until 3pm, when the bluesiest act of the day, Phil Wiggins and Dom Turner took to the stage to perform an array of their sexiest new songs from album Owing The Devil A Days Work, as well as a bunch of old delta blues/folk covers, that I was truly satisfied. 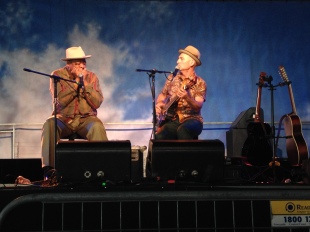 Turner is Australia’s blues God, with his collection of slide guitars and impeccable proficiency, he and Wiggins, one of the worlds greatest harmonica players and the best from Washington D.C, together played a stripped back set that enticed even the youngest of children in the crowd.

The continual layers, and Wiggins old time blues vocals, were a shock. The man is a harp virtuoso, and his singin’ ain’t too far behind.

The connection between the pair is one that hasn’t been seen since Wiggins days with Cephas, and it was something truly inspiring to witness. They enthralled me, made me smile, and threw me deep into a daze of perfected solos and smooth transitions… I didn’t want their set to end, but it did and yet again I was on a journey to find some musicians who could blow my mind!

Steve Poltz was my next discovery. The folk-rocker is renowned for his hilarious performances, that combine anecdotal lyrics, with a whole lotta guitar and a whole lot of comedic input… and that is exactly what he gave us.

Poltz is something else entirely, he pushed a wave of lightheartedness over the audience,yet not once did he allow his songwriting abilities to become overshadowed, not even when he spoke about meeting an overweight and super sophisticated Elvis Presley!

(Not to mention, Steve is also a lovely guy and helped me hunt down a phone when he found out mine had died just before my long journey home… yep, he’s pretty damn great).

Much alike Poltz, the Spooky Men’s Chorale were a highlight.The 12 male vocalists, who famously wear all black and quirky hats got through a hilarious set list that included songs about power tools and eyebrows. Their vocals were tight, and surprisingly phenomenal, a great and unexpected performance that left the older woman next to me in a fit of laughter… she REALLY thought they were funny!

After their performance, it was around 9pm and I intended to see the headliner John Butler play the heck out of his geeetar, but as I approached the tent realised that majority of the festival goers had the same idea, so I decided to head over to the RSL. I was startled to see The Mighty Reapers (who were at that moment unknown to me) had got most everyone in the room havin’ a dance!

Frontman Robert Susz was SUAVE, doing tricks with his mic, and throwing in some unbelievably slick dance moves… he and the band were alluring. With harmonica solos that could easily rival Wiggins’, mind altering blues riffs, some snazzy Howlin’ Wolf covers and FUNKY keys, their distinct combination of Blues, Funk, and Soul was the greatest of ways to end the night.

The Blue Mountains Folk Festival was impressive. Their carfeully selected lineup that is easily in the running with Bluesfest, astounded me. Not only do they welcome signed artists, they allow local bands and unsigned musicians to get up on the smaller stages to do their thing.

The Katoomba locals were welcoming, the market stalls were innovative (most notably, Rolling Records, ran by George, a mountains local who sells second hand records out of the back of his truck), the bar The Boho Bar was filled with 60s decor and inevitably caught my eye, and the positive vibes from each and every soul attending made for a spectacular day.

There is not a bad word to be said about this underrated festival, and I will undoubtedly be attending next year (hopefully with a polaroid that doesn’t break!).